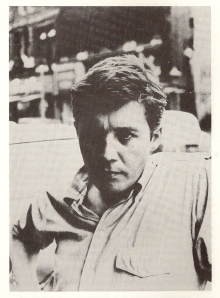 You might be surprised to learn that this ladykiller is no hollywood film star, but a criminally forgotten writer called Jeffrey Bernard. He’s most famous for writing a column in The Spectator called ‘Low Life’, which recounted his disgraceful exploits in the trashy solar system that was the Soho of the 70’s, where he orbited the Coach and Horses and the French House, two pubs that pulled in artistic reprobates like iron filings towards a magnet. Even then it was becoming seedy, and Bernard felt he dwelled in a faintly glamourous snakeskin, with the brylcreemed python that was the Soho of the 50’s having slithered jauntily away, never to be seen again.

His columns recount the men and women he drank with, his four ex-wives, his one true love that was Norman Balon, the offensive landlord of the Coach and Horses, his glory days as a racing correspondent for Sporting Life, the superiority of Smiroff, fights with chinese waiters, his fear of buff envelopes containing missives from the taxman, and his weird tendency to attract gerontophiles (look it up). They are sinuous, despairing, joyful, biting – and always hilarious. His prose is honest and moving. It’s rare to find somebody actually living a low life – and to describe it so unflinchingly. Frequently he was too sick to write them, and the memorable phrase ‘Jeffrey Bernard Is Unwell‘ often appeared in their place.

But what’s puzzling about him is that it is virtually impossible to find any of his writing in print in Britain. I challenge you to go to any bookshop in London (London, mark you, the land of cultural milk and honey) and bring me back the collected Low Life columns. Nobody sells them. I came by mine as a christmas present, which was imported  from America (lovingly, I might add, by my girlfriend. This is interesting, given the self-destructive subject matter. Maybe she’s trying to corrupt me). Thing is, I feel that Jeffrey’s observations on things would be extremely popular, and so i’ve decided to put a few choice cuts from his columns up here. This seems only fair, as I appear to be the only man in Britain with a copy of them. So without further preamble, the wit of Jeffery Bernard:

On the desire to take a cow to the pub:

“I’d very much like to wake up one morning with a cow of the Friesian variety and walk her down to Soho to the Coach and Horses, stopping on the way to buy twenty Players, ply her with vodkas until closing time, whip her off to an Indian restaurant, take her up to the Colony Room till 5.30 and then to the  Yorkminster, Swiss Tavern, Three Greyhounds, get beaten up by Chinese waiters at midnight, have a row with the taxi driver, set the bed on fire, put it out with tears and then wake up on the floor. Could you then milk said cow? I doubt it.”

On being discovered in another pub by Norman Balon, the landlord of his local, the Coach and Horses:

“Who should walk in but Norman Balon. I felt i’d been caught in flagrante. Not since Mavis’s husband came home unexpectedly twenty years ago and found me sitting next to her, stark naked on a chaise-longue, have I felt such an utter shit. Out of bed at last and into the Blue Posts and not the Coach and Horses. Norman, of course, was doing his daily Soho round being bloody inquisitive and trying to assess more or less how much other pubs in the area were taking. So I had to go back to him and unlike a lot of wives, he took me. Half an hour later I was in the Coach having ‘the one’ as though i’d never left it..

….I must say Norman was charming. Some poor bastard, an absolute stranger who’d walked in for a quiet, small beer, was told: ‘Get off that fucking stool and give it to Jeff here. He’s sick’. No, nothing had changed….”

I kissed the barmaids on both cheeks and said, ‘Thank you, darlings. It’s been a great privilege and an honour to receive this drink. I’d like to say it’s been a team effort and I want to thank, not only my wonderful editor, but also Jennifer Paterson without whose motorscooter peregrinations to the Coach and Horses the column would never have arrived at the typesetters; Gina Lewis whose expert subbing prevented the column from being spiked; Jenny Naipaul for phoning me to remind me it was copy day and last, but not least, Suki Marlowe for giving me an encouraging wink. I’d also like to thank all those people who made me feel sufficiently inadequate to take refuge in journalism – my mother, my headmaster, my four wives, bookmaker and Smirnoff.’

It was a wonderful evening and I shall always treasure the drink that is now on my mantelshelf. It makes me feel so important and it’s wonderful to know that we’re all truly wonderful.”

The cider was kept in a flagon
A stone jar held the wine
I lay on the ground and drank it all down
Kicked out of the pubs nearby
I have been to the lowlands
I have been to the coasts
But there’s no country fairer than her shoulder
And I’ve pulled up the boundary posts.

Leonardo Da Vinci – Painter At The Court Of Milan

FRAGMENTS OF A MASTERWORK

Leonardo Da Vinci – Painter At The Court Of Milan.

There is a show down at the National Gallery in Trafalgar Square that is causing quite a stir. Nine of fifteen surviving paintings by Leonardo Da Vinci – including both versions of The Virgin Of The Rocks – can be seen in one place, in the most anticipated exhibition of the year.

It looks at his time at the Court of Milan, where the patronage of the city’s ruler, Ludovico Sforza, allowed him to make great artistic progress. Sforza wanted to make the city a new Athens, brimming with aesthetes. Leonardo’s innovative, mercurial style spawned many imitators, and consequently became the artistic voice of the city’s new golden era.

He was the archetypal renaissance man, multitalented and unencumbered by intellectual limitations. Among his many groundbreaking achievements, this exhibition demonstrates how he brought closer together the humane and the divine in art. His portraits, quixotic essays in the craft of painting, are tempered with divine grace. No one ever made humans so sacred, or virgins so humane.

It’s safe to say that the diplomats of the National Gallery have brought off quite a coup. Established works like the two Virgins, the Musician and the Madonna Litta are shown with newer, more evasive works like the Lady With An Ermine and Salvator Mundi.

Alongside the paintings we are shown pages from his notebooks, allowing us to glimpse his restless interest in everything around him. The anatomical studies were instrumental in his ability to paint the human form. The sketches often inform the paintings, and Leonardo’s talent imbues both with similar force. Who else could give such poignancy to a rock, or an arm, with a few scribbles?

All great men are conundrums, and none more so than Leonardo. He must have been hell to work with. He began paintings, but never finished them. His attitude to commissions could kindly be described as ‘cavalier’. Rushing from city to city, leaving behind him a trail of frustrated clients, it’s almost as if he was a victim of his own wanderlust. He seemed to have a diffident attitude to his own talent. For a painter who regarded painting as the highest possible form of art, his oeuvre is amazingly slim.

Portrait of Cecilia Gallerani (The Lady with an Ermine, 1489-90)

The Portrait of Cecilia Gallerani (The Lady With the Ermine) is perhaps the best painting here. She was the sixteen-year-old mistress of Leonardo’s boss, and she is depicted holding an ermine, which was at one time used by Ludovico Sforza as his emblem. That’s the prosaic explanation – however, it is difficult to see it as being anything other than a phallic symbol. Its face, and the way it is positioned, seem to embody lust, especially when contrasted with the nubile face of its keeper. Leonardo also believed that an ermine would rather die than sully its white fur, making it symbolize purity, but also suggesting darker, bloodier feelings.

Her features – particularly her hand – are beautifully painted. She displays well the fruits of Leonardo’s anatomical training. In contrast the left sleeve of her garment, like the waistcoat of The Musician, is slapdashly painted. Some argue that many of his works were finished by later, inexpert hands to account for this. But it’s tempting to imagine Leonardo turning the full force of his skill on the parts that matter – the face and hands that make her human – and disregarding her fine garments. This in a time when portraits were often as much a record of a sitter’s finery as of the sitter themselves.

On loan from a museum in Poland, it has an interesting history – lost for hundreds of years, discovered, stolen by Nazis, recovered again. It is emblematic of this exhibition and of Da Vinci’s work – mysterious, elusive and brilliant. Nearby, the Portrait of a Woman (La Belle Ferronniere) is an idealized depiction of a lady, possibly Sforza’s wife. Here, Leonardo sculpts away any flaws in her looks to present us with a more androgenous, geometric portrait of a lady, though the painting smoulders despite this. The two works share a similar feeling, and the two sitters a streak of the divine.

The Musician, the first painting you encounter, shows how Leonardo helped bring about a revolution in portrait painting by showing the sitter, a dewy-eyed young man, turned slightly towards us, rather than in strict profile. With his garments picked out in rough brushstrokes, the face, which is slightly sculptural, is painted with luminous, gentle naturalism. Apparently, Leonardo first came to the Milanese court as a singer, though he believed painting to be a more superior art, able to endure where song could not. This is the point he is making here, depicting the singer at the end of his music. Some have even speculated that it is a self-portrait.

The exhibition is well laid out, though it’s hard to pay any attention to the numerous paintings by contemporaries of Leonardo. They are good enough but you realise just how far behind he left them – a champagne mind among beer brushes. The works are arranged in loose chronological order, with the first four rooms being strong arrangements of paintings and their documentary material. It gets a bit incoherent towards the end, with the less well known works like Madonna Of The Yarnwinder almost chucked in as an afterthought.

Has the National Gallery done this unique opportunity justice? Well, res ipsa loquitur. Personally I could do without quite so much documentary stuff but I understand its inclusion. The only real problems are ones beyond its control – the queues, the crowds, the ‘gallery rage’. It’s inspiring, though, that art can still inspire this level of devotion, and things of such great refinement are still widely valued.

It was said of the welsh poet R.S. Thomas that his collected poems were ‘fragments of a masterwork’. Leonardo’s genius survives in many sketches and a handful of paintings, in an attributed limb here and there. Given his scanty canon, I think the same could be said of him. His brilliance shines from every scribble and brushstroke, and we must be thankful for this rare chance to stand before so many fragments of the master’s work.

This article originally appeared in The Westminster News, December 2011. http://www.sketchnews.co.uk/assets/files/TWN4212.pdf

Posted in Uncategorized | 1 Comment
Posted on December 23, 2011 by tomnancollas